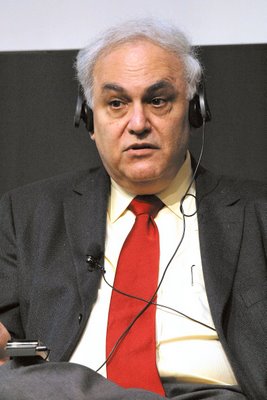 Yesterday I saw a movie called, Why We Fight. It included an interview of Richard Perle, one of the key architects and supporters of the foreign policy that landed us in Iraq. His comments disturbed me. The gist of what he said was that the American character has changed; that most of us now support the Bush doctrine of preemptive wars. He said this is a good thing because it only makes common sense to kill those who would kill us before they have a chance to do so. The example he used to justify this thinking was that if someone was going to shoot you and you knew it in advance, you would shoot them.

Perhaps this is so. Perhaps we are doomed to believe that we “must do unto others before they do unto us”. For me the difficulty with this model is that it makes two false assumptions:

I lack Mr. Perle’s certainty on these matters.

With regard to the first point, I am not confident that I can know in advance that someone is going to harm me. Many times in my life I have been in conflict with someone only to find that we later become friends after talking through the cause of our conflict. How this might play out if I faced a potential killer on a dark street corner in a dangerous city I do not know. Perhaps there would be no opportunity to talk. Perhaps I would be dead. Nevertheless, my preference would be to try and talk even in this situation. Otherwise, I run the risk of what I consider a greater tragedy…taking a life unnecessarily. Perhaps, just perhaps there is a slim chance that I can talk to my potential killer and avoid death. Perhaps there is a bit of tenderness in him for how my death would affect my friends and family. Perhaps he would show me mercy. I hope he would. I hope I would show him mercy.

This brings me to the second assumption underlying the Bush/Perle preemptive war doctrine – that we have the ability to kill the “evil doers” without harming innocent bystanders. Clearly this is not the case. Thousands of civilians die in all wars. Wars are not a precise business. Terms like “surgical strike” and “smart bombs”, “human shields” and “acceptable collateral damage” are lies. When I hear about a surgical strike on the enemy target and that there was acceptable collateral damage I can lull myself into believing that I am listening to reports of rationale humane activities. But if I am honest I must ask myself, “How humane is it to kill women and children?” and “How rational is it to mimic the actions of those who I call evil?” How rational is it to propose that the way to stop fear and vengeance is to engage in fear and vengeance? If I kill my potential killer on the street corner at night will not his injured children, friends and family seek vengeance on me? If I attack all who appear to threaten me will I not find myself alone, with only my fears to comfort me?

So, much as I respect Mr. Perle’s years of experience and vast knowledge, I must disagree with him. Not all American’s believe his idea that it is better to go to war with others before they go to war with us. I for one do not and I know there are others like me. The preemptive war doctrine sounds too much like the model used by other failed empires and the tyrants that ruled them. On a personal note, even if Mr. Perle and his kind decide to pursue lives based on fear and vengeance I cannot afford to do so. When I practiced this in the past it landed me in a mental institution. I have no desire to return.

I am one of the fools who still chooses to believe that love and tolerance are always preferable to fear and vengeance.

You are not a fool, many including myself feel the sameway. Great Post!

Apologies for the rant. I had too much coffee.

David Young - The Man In Full

Click on David to see videos of his trip to California.